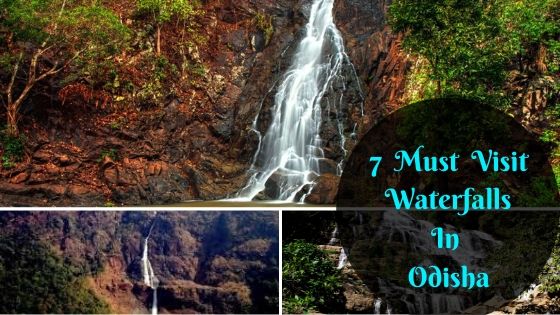 Planning for a nature’s trip? Odisha is well known for its national parks,cultural  heritages,oceans and lakes. But what about its waterfalls? Are you aware of its amazing and marvelous waterfalls?

Odisha is one of the most sort out places to spend a short vacation with our family and friends. It  is a home to stunning waterfalls all across the state,whose scenery is adorable. Almost of all its districts have numbers of waterfalls that are worth exploring.

Barehipani waterfall is the second highest waterfall in India. It is located in Simlipal National park in Mayurbhanj district. It is a two drop waterfall that descends from meghasini hills. The tallest drop ranges 259 m.

Those who are visiting the national park for sighting the Bengal and White Tiger, their experience becomes even exciting and wonderful with the presence of this popular tourist attraction amid the thriving vegetation of the region.

Khandadhar Falls is located at Nandapani, Bonaigarh in Sundergarh district and is regarded as 12th highest waterfall in India. The falls descends in the shape of a horsetail, amidst a dense forest,dropping from a height of 244m. It is a single drop waterfall.

Travellers can hike and trekk after monsoons. It is a very good picnic spot and around its entire area and the rare medical could be found.

Duduma Waterfall,known as one of the highest waterfall in India,is located in Badigada village of Koraput. This is originated from river Manchkund. It covers both Koraput and Visakhapatnam districts of Odisha and Andhra Pradesh respectively.

It is a one drop waterfall and  helps in generation of electricity.The waterfall is considered one of the best tourist spots in Odisha where people can sit back and relax.

Joranda Waterfall which is located in close vicinity to Barehipani falls,is known as the 19th highest waterfall in India. This waterfall is also located in Simlipal National Park,district of Mayurbanj.

Being a  straight and single drop,this waterfall is  surrounded by beautiful hills and lush green trees, will be an ideal location for photographers and nature lovers.

Koilighugar Waterfall,a splendid waterfall is located in Lakhanpur, near the village  Kushmelbahal. The waterfall is in a rivulet named Ahiraj which originates from the ‘Chhuikhanch’ forest. After the waterfall, the rivulet flows westwards to merge into the Mahanadi river.

This is a single drop waterfall that can be a great picnic spot with family and friends.

Badaghagara Waterfall is a famous waterfall,which is a special part of Ghaghara River. It is about 9 km away from the district headquarter of the town, Kendujhar.

It is a single drop waterfall.The region around this waterfall is an ideal place for picnic and trekking.Near this place,there is a famous temple named  Ghatagaan Tarini is also situated .

Debakunda or Devkund Waterfall is located in Mayurbanj district and is a part of Simlipal National park.  It is a combination of two words that is “Deva” means deity and “Kunda” means tub.

The flowing water from hill top has created a pond.Being, a religious as well as a tourist destination, the Devkund waterfall is popular among adventure enthusiasts, nature lovers and also religious individuals who like to visit the temple located on the top of the hill, named Shakti Pitha.