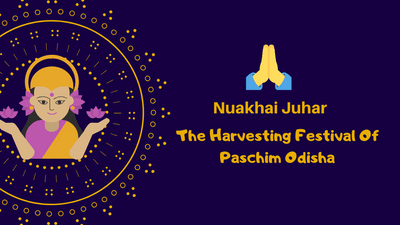 Nuakhai is a major festival celebrated by farmers of Western Odisha. On this day nuakhai is observed to welcome the new rice of the season.

Nuakhai generally falls during the months of August and September, where it is celebrated just a day after Ganesh charturthi.

As per the tradition Navanna (newly harvested rice) was offered to Maa Samaleswari the presiding deity of Sambalpur.

The nine colors of Nuakhai :-

The word “Nua” means “New” and “khai” means “food“. So the name means the farmer are in possession of the newly harvested rice. The festival celebrated at a particular time of day which is called “LAGAN“.

Arsa pitha is prepared to this festival. When the lagan comes the peoples first remember their village god or goddess and have their Nua.

Every year the “Tithi (day) and Samaya (time)” of observance was astrologically determined by hindu Pandit. Worshipper set together at the Brahmapura Jagannath temple in Sambalpur and calculated the day and time.

On the day of Nuakhai festival different types of food which is offered as a “Prasad” to everyone after offering to the first Dietees. All the elders and youngers of the house together eat food in one place. Then all comes together to seek blessing of the elder.

There are many different types of festival celebrated in Odisha. Among them very popular festival on NUAKHAI celebrated Western Odisha.

NUAKHAI is an age old harvest celebration in Western Odisha. On this occasion people exchange greetings with friends, relatives and well-wisher.