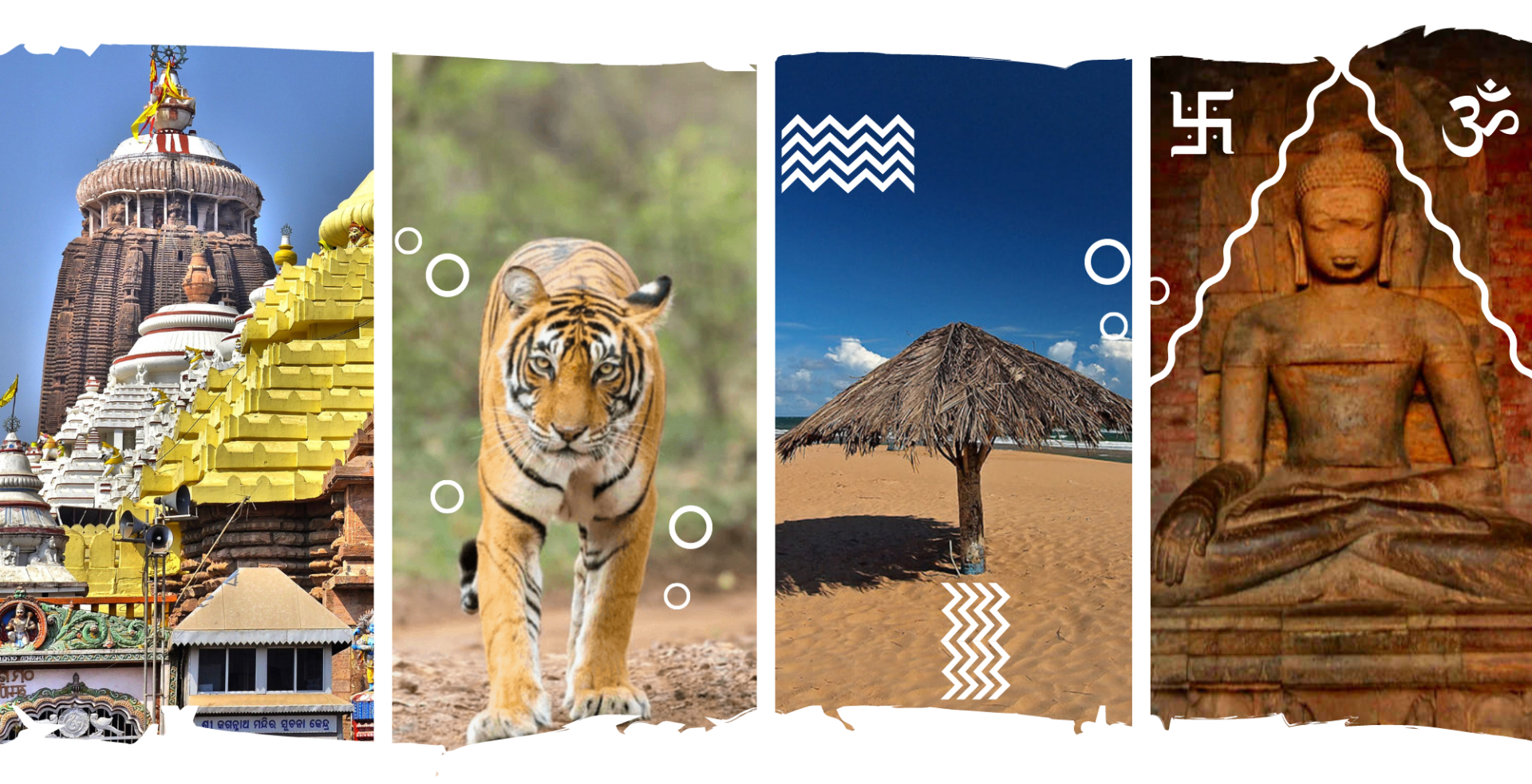 Odisha is a culturally rich state of eastern India and is surrounded by its glorious history. Its well said that this ancient state is the best-kept secret of India. This coastal state consists of marvelous architectural wonders of forts & temples, natural bodies, beaches, etc. Here is a list of top tourist destinations of Odisha that are well present within a radius of 200 kilometers from the capital city Bhubaneswar.

These spots are divided into four categories:

Konark’s Sun Temple is one of the most beautiful monuments of India. Dedicated to the Sun God, the temple is in the shape of a gigantic chariot. It is a part of the UNESCO World Heritage Site in India. This is one of the best tourist places near Puri.

These caves are situated on two adjacent hills, Udayagiri and Khandagiri. These have a number of finely and ornately carved caves built during the 1st century BCE. It is believed that most of these caves were carved out as residential blocks for Jaina monks during the reign of King Kharavela. Udayagiri means “Sunrise Hill” and has 18 caves while Khandagiri has 15 caves. Udaygiri is the most popular tourist spot in Bhubaneswar and the pride of Bhubaneswar tourism. While Khandagiri is a great picnic spot in Bhubaneswar.

Lalitagiri – present around 80km to the north of Bhubaneswar, Lalitagiri is a major Buddhist complex in the Indian state of Odisha comprising major stupas, ‘esoteric’ Buddha images, and monasteries.

Ratnagiri – This hill is situated in between the Brahmani and Birupa rivers in the Jajpur district. This was once a major Buddhist monastery in modern Odisha. The Buddhist monuments were constructed from the 5th century CE onwards, with the last work in the 13th century, and the peak period of work done between about the 7th to 10th centuries.

This tourist destination is the largest coastal lagoon in India and the largest brackish water lagoon in the world. This lake offers a diversified display of migratory birds ranging from white-bellied sea eagles to flamingos, and from golden plovers to sandpiper. The lagoon hosts over 160 species of birds in the peak migratory season. The lake is home to a number of threatened species of plants and animals and is an ecosystem with large fishery resources. This place plays a lead role in promoting tourism in Odisha.

Golden sea beach, the most popular tourist place in puri is located at the shore of the Bay of Bengal. This is one of the most popular tourist destination in the state. The beach hosts sand art displays. And was awarded the prestigious ‘Blue Flag’ tag on October 11, 2020, by the Foundation for Environment Education (FEE), Denmark. This is one of the best places to visit near Bhubaneswar.

Located 125 Km from the capital city of Odisha, Paradip is one of the most important commercial ports of the country and a popular tourist place near Bhubaneswar. One can see fascinatingly huge ships and other marine activities at this beautiful confluence of estuaries of Paradeep, Mahanadi, and the Bay of Bengal.

In Southern Odisha, this beach is present around 15kms away from the city of Brahmapur. It attracts a number of tourists throughout the year to enjoy a slice of a serene life. It was a popular trading center during the British reign and still known as a vibrant hub for commercial activities.

This visiting place in Bhubaneswar was established in 1960. This zoo is present on the outskirts of the city. Nandankanan is the first zoo in India to join the World Association of Zoos and Aquariums (WAZA) in 2009. Also the first zoo in India with a white tiger safari. Also considered as the best tourist spot in BBSR. It contains a botanical garden and part of it has been declared a sanctuary. This is the most amazing place to visit in Bhubaneswar.

Similipal National Park is a national park and a tiger reserve in the Mayurbhanj district in the Indian state of Odisha covering 2,750 sq.km area. It is the 7th largest national park in India. The park is home to the Bengal tiger, Asian elephant, gaur, and chausingha. Along with some of the beautiful waterfalls like Joranda and Barehipani Falls. This protected area is part of the UNESCO World Network of Biosphere Reserves since 2009.

Present 150kms away from the city of Bhubaneswar, Bhitarkanika is the largest national park of  Kendrapara district in Odisha. It hosts many mangrove species and is the second-largest mangrove ecosystem in India. The national park is home to Saltwater crocodile, Indian python, king cobra, black ibis, darters, and many other species of flora and fauna.

This wildlife sanctuary spreads across 795.52 square kilometers and is a habitat of tigers, leopards, gaurs, sambal, spotted deers, four-horned antelopes, sloths, gharial, and many others. It is located on the banks of River Mahanadi, about 140 km from Bhubaneswar. One can also take part in various adventure sports here like river rafting, trekking, fish angling, boating, etc.

The actual list of tourist places in Odisha is enormous and will require proper planning and time to view them. But these locations are not only famous for their enchanting beauty but are also most suitable for a single-day trip (from BBSR) to free up your mind. And If you are desiring to spend some time in these spots, don’t wait, pack up your bags, plan your journey, and move on a ride.