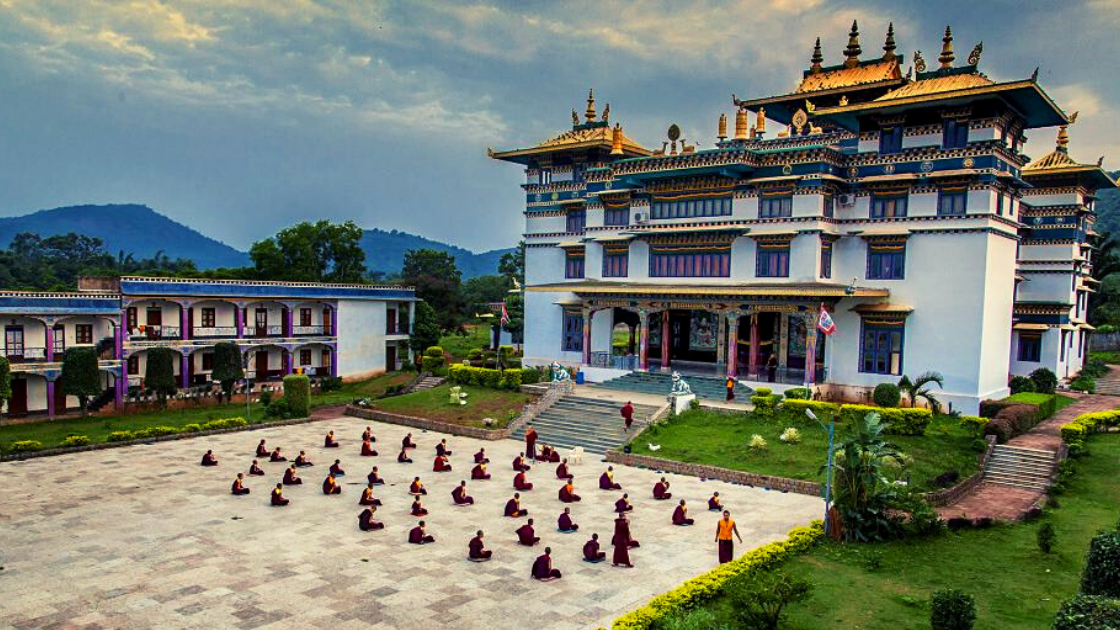 I love to visit different places and explore the new things but when your plan worked out so well it happens to be much more than a great trip!

Buddhism which started as an off shoot of Hinduism in India, has spread across the world to become the 4th largest religion in the world. There are many Buddhist monasteries in India which preach the peaceful teachings of Buddha.

One such monastery is in Southern Odisha in Jirang. It is nearly 80-85
kms from the town of Berhampur. So, me and my cousins set out on a journey on our Car to find Lord Buddha.

Here comes our first destination i.e. Taptapani-Hot Spring which is about 16km from the Gajpati district.

Taptapani is a naturally formed hot water sulfur spring. The original spring is worshipped as a local deity and has found mentions in many folktales as well. This area was part of the Kalinga empire from ancient times.which is about 16km from the Gajapati district.
The name Tapta means hot, The hot water from the natural spring of taptapani are attributed with medicinal properties that can be a bath in at the pond created next to the hot spring.

We went inside the temple, took some beautiful pictures

Now, headed towards our next destination i.e. Jirang-The Tibet of Odisha

Jirang is a place in odisha which is famous for its beautiful Buddhist monastery. It is also known as Padma Samvab Mahavihara. It is the largest Buddhist monastery in Eastern India. It is located in Chandragiri, Gajapati district, Odisha state.

The monastery inaugurated by tibetan guru Dalai Lama in 2010. It is a residence-cum-college for budding Buddhist monks who come from all over India to study.

In 1959 during the occupation of Tibet by China lots of Tibetans seek shelter in India and nearby place. At that time Chandragiri was chosen as one of their main settlement camp for all Tibetan refugee.

There is no such specific time to visit at this place but to enjoy the climate the preferable time will be from November to February(Winter Season).

There are frequent private buses and Govt. buses services that are also available from Bhubaneswar to Berhampur From Berhampur you can go chandragiri by bus or you can hire taxi to reach this Place.

Then I reached our final destination for that day i.e. Khasada waterfall.

Odisha is home to a number of beaches and a large number of stunning waterfalls. Khasada waterfall is one of those waterfalls which has a beautiful view and would be admired by nature-lovers. This region has very attractive surroundings and the rolling hills can be seen here. The place is very quiet and has peaceful and relaxing surroundings.

Khasada named because of the slippery nature of rocks. literally, we used to take the support of each other while walking on the rocks. it was damm slippery!

This is an ideal destination for nature lovers and for those interested in photography. This location would be a fun place for a picnic and for trekking.

As soon as I reached the khasada waterfall, it starts raining, and now it’s time to go for a waterfall bath. The falling of the water, after the first shock is over, gives an indescribable feeling of pleasure, by its constant beating. I had so much fun there.
After having a bath, I decided to go into the cab like this only(as I was all wet because of the rain) My driver was so cooperative that he allowed to enter his cab in wet clothes. I was very thankful to him.
Now as I was so hungry, I was desperately looking for Dhaba to have lunch there, now finally I found a Dhaba after waiting so long and had a perfect lunch there.

My driver has informed about a deer park which is just near that Dhaba and then I decided to go there as well. I went there it was 5’ o clock in the evening and deer park was about to close but anyhow I reached on time and went inside the park. I took so many pictures there .it was much more beautiful.

finally, I get back to the cab and headed towards Berhampur. I played Dumb charades in-cab, enjoyed a lot throughout the journey.
I had a perfect day just not because the places visited are so beautiful but my plan to visit all these places in a single day has worked out very well.

I hope my experience will help you in some way

i will recommend everyone to go there once and have fun!