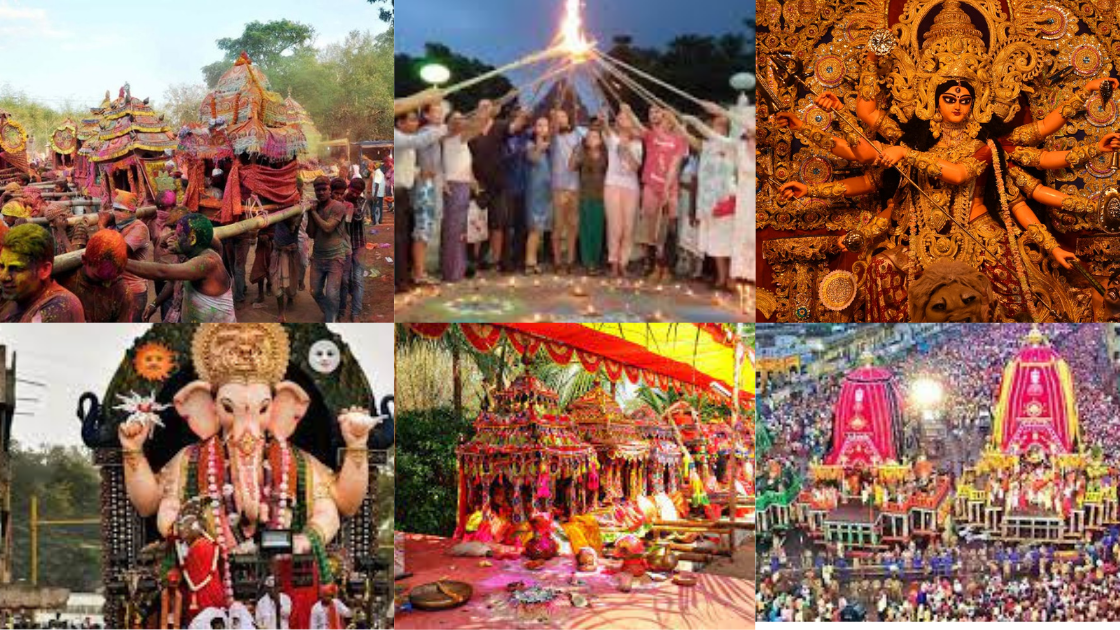 Festivals are a big part of Indian culture and tradition. Every part of our beloved India will high spirits of festivity.

Odisha is a land of 13 festivals in 12 months. Odisha, the land of diverse cultural heritage, celebrates numerous religious festivals round the year. The festivities are usually vibrant, make by colorful procession, hues gatherings and the entire region revels in a festive atmosphere.

Over the centuries Odisha has been home to many religions and various sacred places steeped in history.

Here are Top 8 Popular Festivals of Odisha that you should know and experience.

Durga puja , also called Durgotsave is an annual Hindu festival. It is celebrated during the month of ashwin or kartik, during Septmber or October. As per hindu scriptures, the festival marks the victory of goddess Durga in her battle against the shape-shifting asura, mahishasura. Durga puja coincides with Navaratri and Dussehra celebrations observed by other traditions of Hinduism celebration the victory of Ram against Ravana. The festival is one of the most important ones celebrated by the people in odisha.

Time of celebration – anywhere between September and October

Time of celebration – June or July

Chandan yatra is another popular festival is Odisha. chandan yatra meaning Sandalwood voyage is Sanskrit. Which continues for 21 days is observed in two parts- Bahara Chandana and Bhitara Chandan. Every year on the occasion of Akshya Tritiya, thousands of pilgrims flock the pilgrim city of Puri to witness the beginning of the 21 days water sports festival- Chandan yatra of lord Jagannath. The Yatra takes place at the Narenda pokari (pond) in Puri. during this festival they are taken out of the temple in procession for perambulation in water on floats or boats. The richly decorated boat are called ‘Chapa’ ‘Chapa‘ is the Oriya equivalent of ‘ float’.

Time of Celebration – April and May

Raja is one of the most important festivals in Odisha. Raja parba or Mithuna Sankranti is a Four day long festival of womanhood celebrated in Odisha. The term Raja came from Rajaswala, meaning Menstruating woman. The First day is called Pahili Raja, the second day is Mithuna Sankrant, the third day is Bhumidahana and the fourth day is called Vasumati Sanna. The second day of the festival signifies beginning of the solar month of mithuna from, which the season of rains starts on this day, girls wear new dresses, play cards. The vasumati goddess got her mensuration during this time. When we talk of Raja, one thing that instantly comes to our mind is “Poda Pitha”. The poda pitha delicacies like Arisa pitha, Mutton curry and Raja pana. Makes it one of the most dearest and special festival in every Odia household.

Time of Celebration – June or July

Dola purnima is a popular Hindu festival, which is celebrated on a full moon day in the month of Falguna.(March) It goes on for six days, beginning with the famous Dola jatra, which falls on falguna dasami day. dola jatra, the idol of Lord Krishna is carried to all the home in the village on a decorated Vimana in a procession with Sankirtan mandali, musicians. Each household in the village offers Bhog to Lord Krishna. The people who follow the procession play with Abira (dry colors) on the final day of the purnima, the celebration culminates in a swing- festival for the deities.

In Odisha, Diwali is celebrated in the same way as the rest of the world but with the exception of one small ritual, called Bada Badua Daka. The festival of Light is not just limited to customary bursting crackers and exchange of lip-smacking sweets, bust also accompanied by kali puja. The people of culture celebrate kali puja and Diwali with much fervowr and gaiety. Rows of oil lamps, candles and lanterns adorn the thresholds of all houses. It is a ritual that family’s forefathers. All members of the family hold a bundle of jute stems in their hands. Lighting their respective bundles from the flame on the rangoli, they raise them sky words chanting the following verse.

Andhara re asa, Alua re jao.

Ganesh chaturthi is celebrated as the birthday of the god Ganesh usually in August. It is primarily observed by educational institutes and student. The god is offered prasad like modak and laddu in pendals. Student may aslo offer writing utensils and notebooks, which are used by them after the festival. Huge idols of lord Ganesh adored several decorated pendals with at various places across the state, including Bhubaneswar, Puri, Cuttack, Khordha and Rourkela. School, colleges and youth clubs organized special puja to mark the festival. People offered prayers to Lord Ganesh who is known as the God of beginnings for wealth, sciences, knowledge, wisdom and prosperity.

Nuakhai, as the name suggests that nua name New and khai means Food so, the festival of nuakhai is a festival to celebrate newly harvested food by the farmers. One day after the celebration of Ganesh chaturthi it is celebration especially in the western part of Odisha. People wear new clothes and offer prayers before the god and eat delicious food prepared from the newly harvested crops. Nuakhai festival is a symbol of Sambalpuri culture and it reminds people of the Odisha. The date of Nuakhai is fixed since 1991 on Bhadraba Sukla Panchami thithi. Currently people worship Goddess Laxmi on the day of Nuakhai. All family members take blessings from the elders for happiness and prosperity in their life.

It is an amazing experience to express about the top 8 festivals of Odisha. If you are planning to visit, I would suggest that you do visit during the festival time to enjoy. I hope you all are getting more excited by reading this article, If you want to give any feedback you can suggest us in the comment box. Thank you and all the best.