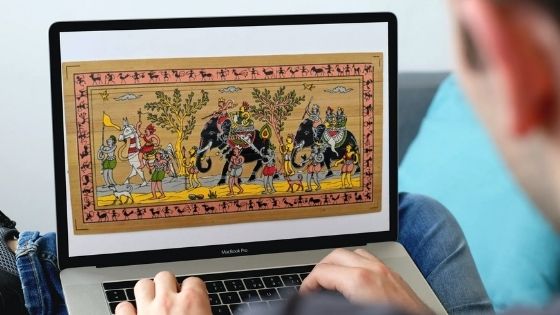 Palm leaf painting is one of the most ancient craft of the World, etching and painting on the palm leaf still thrives in the state of Odisha called Talapatrachitra. In this article i want to describe some important things about palm leaf painting.

Palm leaf painting of Odisha are one of its most ancient art from. The palm leaf illustrations of Odisha are mainly of two types .

Most of the palm leaf illustration in Odisha are simple. Horoscopes were traditionally written on palm leaves by professional horoscopes makers knows as Nahaka.

After the development of manuscripts, leaves were used to transfer written messages. Palm leaf was used in ancient India to preserve the written texts for the succeeding generation.

The ancient art innovators also devised an art from that used palm leafs for etching and painting. It is said to have originated from the Odisha region of India formerly known as Odisha. It is called Talapatrachitra as one of the most creative art forms in the region till date.

Talapatra are ancient but mesmerizing and still retain the authenticity and class of ancient art. Even more interesting is the process of crafting Talapatra. The ethnic art from essentially consists of inscribing letter artists designs on Palm leaf, mostly cut into standard sizes and held together with two wooden plank covers stringed through a hole in the centre.

The palm leaf the unripe leafs of the palm tree are first cut and semi dried. They are then buried in swamps for 4-5 days for seasoning and then dried in shade. These are then stitched together as per need. At times they are stitched after the etching is complete.

Talapatrachita even this art form is highly influenced by mythology and hindu deities in most of the paintings. Both Talapatra and Pattachitra are common in other regions of India too, in various ethnic and variations.

Palm leaf paintings are the other ancient traesured arts of Odisha, also known as Tala Pattachitra and drawn on palm leafs. The process of palm leaf painting involves hardening of palm leaf, sewn together there after to form like a canvas. The images are traced by using black or white ink to fill grooves etched on rows of equals sized panels on palm leaves leafs sewn together.

I have tried my best to bring you some information that really shows the skill, creativity & the tradition on Art Leaf Painting. Please leave your suggestions, and feedback to bring more interesting article on our city, place & state Odisha.