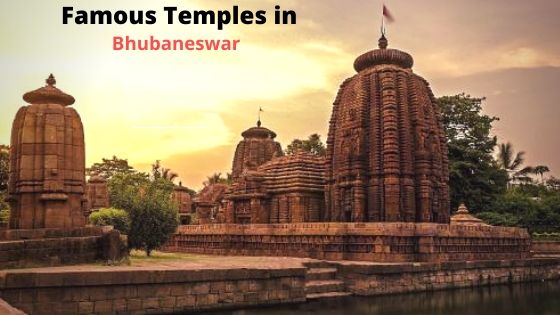 Bhubaneswar the capital city of Odisha is one of the most popular tourist destinations in India. There are many things to do and places to visit. There are over 700 temples in and in the surrounding regions of Bhuabaneswar ( EKAMRA KSHETRA).

The name BHUBANESWAR comes from Shiva’s Sanskrit name, Tribhubaneswar, meaning “Lord of Three Worlds”. Old Hindu scriptures say that EKAMAR KSHETRA was one of Lord Shiva’s favorite places, where he liked to spend time under a huge mango tree.

Lingaraja temple is one of the oldest temples in Orissa and is located temple city in Bhubaneshwar. The main deity of this temple lord shiva. It represents the Kalinga architecture and is built in Eula style which has four components namely, vimana, jagamohana, natamandira, bhoga-mandapa.
Shiva Ratri is the main festival here followed by Ratha Yatra.

A popular 11th-century Hindu temple that can be found in EKAMAR KSHETRA, is called Rajarani Temple in Bhubaneswar also known as a love temple the RajaRani Temple is locally known as the ‘love temple’ because it contains some sensuous carvings of women and couples. The temple is maintained by the Archaeological Survey of India.

The Mukteshwar temple is one of the smallest and most compact temples in Bhubaneshwar. However, it’s famous for its exquisite stone archway, and ceiling with eight-petal lotus inside its porch. A number of the carved images (including lion head motif) appear for the first time in the temple architecture.

Try and catch the Mukteshwar Dance Festival, which is held on the temple grounds during mid-January each year.

At a distance of 15 km from Bhubaneswar Railway Station, Chausath Yogini Temple is a Hindu temple situated at Hirapur, Bhubaneswar. Situated on the bans of Bhargavi River, it is one of the famous temples in EKAMAR KSHETRA .

The Brahmeswara Temple is located in Famous temple city Bhubaneswar, the capital of the state of Odisha, This temple is dedicated to Lord Shiva. At the end of the 9th century, it was built. The temple was built by King Udyotakesari’s mother Kolavati Devi during the Somavamsi king’s 18th ruling year.

Ram mandir is a most beautiful and attractive temple . situated by near Kharavel Nagar in Bhubaneswar.

This temple is dedicated Lord R, Lord Lakshman, and Goddess Sita. The high rising spire of the main temple visible from many parts of the capital city, is its main attraction. The major festivals celebrated are Ram Navami, Vivaha Panchami, Janmashtami, Dussehra, Shivaratri, the temple has been built and is managed by a odisha government.

ISKCON Temple is located in the heart of temple city Bhubaneswar. It is one of the beautiful and well maintained places to visit in Bhubaneswar. This temple establish in 1991 by ISKCON(International Society for Krishna Consciousness). This temple is dedicated Lord Krishna. the temple follows the great scriptures of India, Bhagavad Gita and Srimad Bhagavatam

In my experience, Bhubaneswar is one of the most attractive for religious people who loves to visit new new temples. I have tried listing most famous temples situated in Bhubaneswar. Read & share with your family and friends.