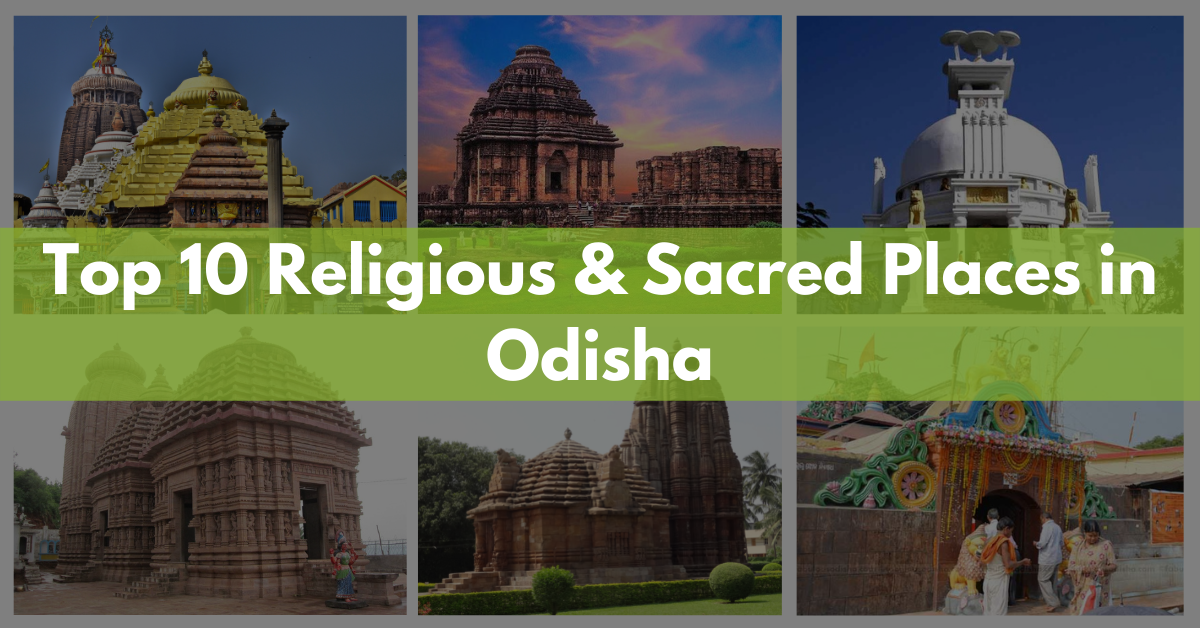 We know our Odisha is a land of temples. This state is known for its prominent antiquity and the arts. This reason makes the state a unique destination for spiritual alleviation.

In this article I’m discussing about the top 10 religious & sacred places in Odisha. Our state is popular for its ancient & esoteric religious and sacred places. You can visit these places for their spiritual significance and architecture.

We love to go new pilgrimage sites & sacred places. These places are give to us so much peace and when we visit these places we know about our Odisha’s history, culture, religious and artistic works.

Here I have listed my favourite top 10 religious & sacred places of Odisha which you can visit.

Puri is one of the most famous religious places in Odisha. The main attraction in this city is Sri Jagannath Temple & Sea beach. It is one of the char dhams and visited by devotees and tourists all through the year. It is also one of the oldest temples in Odisha that dates back to 10th century. The temple is dedicated to Jagannath, a form of Lord Vishnu. You must visit the temple during the Rath Yatra festival.

Best Part: The temple does not create a shadow during the daytime. You can’t hear the sound of the waves of the ocean when you inside the temple.

Dedicated to Lord Shiva, Lingaraj Temple is the largest temple in Bhubaneswar. The main attraction of the temple is the Shiva Linga, which is believed to have appeared naturally. The temple was constructed by King Jajati Keshari in the 7th century. The sanctum in the temple is decorated with flowers and lights on the occasion of Maha Shivratri and is a sight to behold.

Best Part: The Linga inside this temple appeared on its own and is known as ‘Syambhu Linga.’

The Shanti Stupa in Dhauli is one of the spiritual places in Odisha that is visited by tourists from all concerns of the world. This stupa was constructed in 1970 by Kalinga Nippon Buddha Stupa in partnership with the Japan Buddha Sangha. While you enter this Buddhist Peace Pagoda, you will be able to see Ashokan pillars with two lions standing atop.

Best Part: The Daya river flowing by the heritage sight is a pleasure to the eyes.

Dedicated to Lord Shiva. Here you will be able to see another Oriya style of architecture. Brahmeswara Temple was constructed in the 11th century, and the Shivalingam is worshipped here. Four shrines surround the temple. Many tourists visit this temple and admire the carvings. It is built in the pyramidal style and has many beautiful carvings on its interior and exterior walls. There are many stunning and beautiful parts of the temple which is divided into different parts. It has banquets and dance halls which are beautifully designed.

Best Part: It is built in pyramidal shape and has beautiful architecture in all parts of this temple.

Considered as one of the Shakti Peethas in Odisha, Maa Tara Tarini Temple is positioned on the banks of River Rushikulya. Chaita Mela is the most important event celebrated inside this temple. This is said to be a wish fulfilling temple. It was built in the 17th century and has 999 steps which makes to it more special. It is located on top of Tara Tarini Hill. The sacred River Rushikulya is belived to be the elder sister of the River Gangas.

Best Part: This is one of the Shakti Peethas and is known to be a wish fulfilling temple.

This temple is dedicated to Goddess Chamundi. It was built in the 8th century with Kalinga architecture. It is also called the ‘Tina Munia Mandir.’ This is a rare temple which are intricate and beautiful carvings. The tower of this temple is similar to the Dravidian style of South Indian temples. This is a scattered temple known for its architecture.

Best Part: The carvings inside the temple are striking.

One of the most popular temple in Odisha is Ram Mandir which is said to be the most visited place in Bhubaneswar. Images and idols of Lord Rama, Lakshman, and goddess Sita have been installed here. Many of the major festivals are celebrated in this temple with excitement. The daily Aarti draws a lot of devotees to this temple. Ram Navami is the grand festival of the temple and many devotees come this temple during this festival.

Best Part: This temple is famous for its morning and evening aarti. Many devotees visit this temple during this time.

Located on the calm banks of Mahanadi, lies one of the oldest Odisha temples. Like many temples in India, the origins of the temple are based on old tales and stories which are as interesting as the imagination. Nearly 20-25 lakh people are visited this temple every year and we can say it is the signature of this temple. This temple is famous for its ‘Chandi Bhog’ and if you have ever visited this temple then definitely taste it.

Thank you for giving your valuable time to this article. Hope you got know all the information about the top 10 religious and sacred places in Odisha. If you have ever visited these sites then comment us your experience.