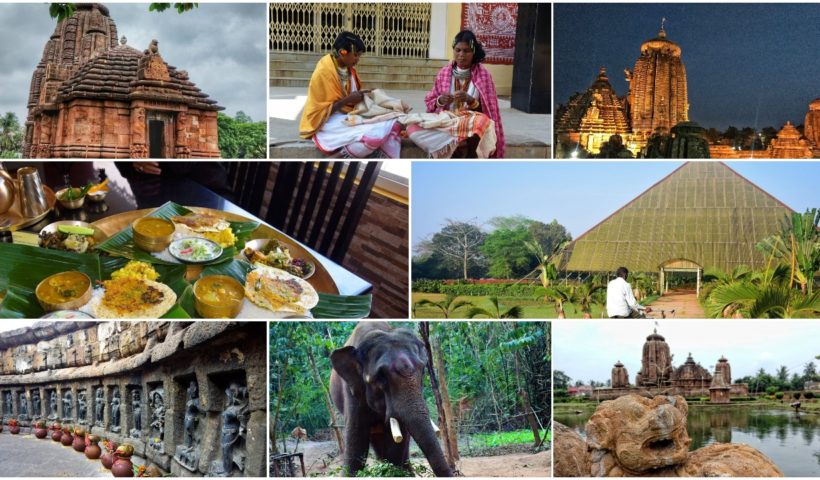 Bhubaneswar, the capital of Odisha, is an important trade center and religious hub in India’s North East. Often called the Temple City (some of which attract the highest number of tourists in India). It forms the Swarna Tribhuja (Golden Triangle) with two other Odisha cities, Puri and Konark.

But that’s not all.

Bhubaneswar also has some iconic monuments and beautiful natural attractions. And then there’s its rich culture, which can be traced back to the third century BC.

It is time to pack your bags and set on a trip to scratch off a few destinations from your bucket list. Here is the list of some places you can visit in and around Bhubaneswar.

Let’s get into some more places in and around Bhubaneswar for getting some ideas.

Situated a few miles away from Bhubaneswar, the Udayagiri and Khandagiri Caves are rock cut caves believed to have been carved out by Jain monks. The caves sit adjacent to each other and have inscriptions written all over its walls.

Within the two caves, there are many small caves that have important stone carvings, footprints, and sculptures. On the Khandagiri hill, you can visit a beautiful Jain temple.

The Ashoka Rock Edict is a massive boulder located at the site believed to be where the Kalinga War took place. Thought to be the earliest records of life found anywhere in India, the boulder is carved into the shape of an elephant.

In the middle section of the boulder you can see the “12 Edicts” inscribed in the Brahmi script. Close to the edict lies a pagoda that was built by the Kalinga Nippon Buddha Sangha sometime in the 70s.

Next, I am going to give the list of some religious places in Temple city Bhubaneswar.

The Shanti Stupa is also called Peace Pagoda and was built by the Japan Buddha Sangh and the Kalinga Nippon Buddha Sangh in the 70s. It is situated at the top of the Dhauli Giri hill about 7 kilometres away from Bhubaneswar (on the way to Puri).

Many tourists and locals frequent this place to meditate and pray. The Shanti Stupa is surrounded by stupas and inscriptions believed to have been from the period of King Ashoka’s reign.

The Rajarani Temple was built sometime around the 11th or 12th century. It is one of the city’s most famous temples and takes its name after the red sand stone that the temple is constructed from.

The Brahmeswara was built sometime in the 9th century in honour of Lord Shiva. The construction of the temple follows typical Indian architecture. The door frames of the temple contain beautiful designs and symbolic inscriptions.

Shaped in the form of a pyramid, the temple was constructed in the style of typical Orissan architecture. The outer walls of the temple have images of hieratic deities, human beings, and geometrical shapes on them.

This historic temple is said to have been built by Yayati Kesari. It is one of the popular temples in the city and attracts a lot of devotees from across India. The tower has a height of 180 feet and, inside the sanctorum, there is an eight-inch shiva lingam. The temple is surrounded by a beautiful garden with exotic plants and gorgeous flowers.

Legend has it that the early inhabitants worshiped the original image of Vishnu at the spot where this temple is built. Hence, the Ananta Vasudeva Temple is believed to be of historic importance to local devotees.

The exterior of the temple is similar to the Lingaraj temple; the difference, of course, is that it is dedicated to Lord Vishnu instead. Inside the temple lie idols of Krishna, Balaram, and Subhadra.

Travel Tip: Visit the temple during the festival of Janmashtami for a special experience.

Let look into more places in & around bhubaneswar

Come to an end and get the brief idea about some scientific places in Bhubaneswar.

Located inside the Chandaka forest, the Nandankanan Zoo houses more than 67 species of animals. The zoo also houses a botanical garden with different varieties of plants. Animals such as crocodiles, tigers, lions, and monkeys reside at the zoo.

The Odisha State Museum houses artifacts, texts, images, and much more. All of these are synonymous with Odisha’s rich history. Some of the important artifacts stored are bronze tools, paintings, and a unique collection of rare palm-leaf manuscripts. You will have to pay for parking at the museum as well as a fee for carrying your camera into the museum.

This park is built at the site where former Prime Minister Indira Gandhi gave her last speech. Inside the park, there are many slides and rides that kids can play on. Adults can take walks on the lovely footpaths or watch the musical fountains. There is also a canteen that serves delicious local delicacies inside the park.

Located just off the highway, the Museum of Tribal Arts & Artefacts displays clothing, bead ornaments, and other cultural artifacts that are synonymous with the tribal people of Odisha.

There is a separate gallery in the museum where agricultural equipment, as well as fishing and hunting weapons used by the tribal people of the state, are displayed. At the museum, you can shop for colourful cloth paintings drawn by the Saora people.

Located close to the airport, the Odisha Modern Art Gallery houses contemporary paintings by local as well as international artists. While some of the art is permanently exhibited at the gallery, there are many travelling exhibits held here.

Those who want to showcase their talents can take a short art course at the gallery. You will have to check the Odisha Modern Art Gallery’s website for details.

So there you have it, folks. These are the best places to visit in and around Bhubaneswar. Have you been to the city? What are some of your favourite places to visit? Do let me know if we’ve missed out on any important ones in the comments section below.